It looks like Emap is trialling QR codes in Kerrang, one of its popular music magazines. I thought I'd give it a go and see what the download process is like as I don't have a copy of Kerrang handy. And actually, it's pretty fast and smooth. All good so far from Kaywa the tech company behind it.

At the same time as downloading, the wapsite gave me the option of entering a 'mobile profile' so I thought, why not? Anyway, that started out well and turned out to be very painful. It's a tiny screen with a tiny font so difficult to see. That aside, it was difficult navigating between check boxes (I couldn't tell where I was on the page) and then it kept asking me for the same information over and over again and then it botched what I'd already put in there and next thing I know my password is my family name and my mobile number is my country so I give up and escape. Still, I've got the application so that's ok I suppose. 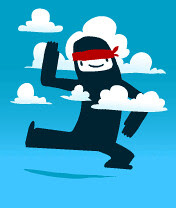 Next, I try out the system from the Kaywa website and manage to get to google search and also download a free wallpaper... and it's *really* fast.

But there's a but. To use the system, you have to remember you have the application, find it buried somewhere amongst all the other stuff on your phone, open it, open the camera shutter (I have a Nokia N70), point the camera and then it reads it automatically. It would make a WORLD of difference if it operated like Shozu and was integrated into the camera. So as soon as you take a photo as normal, it picks up what it's looking at and connects to the app accordingly. Until that happens, it's going to be very difficult to get any kind of traction or critical mass as you're fundamentally trying to change behaviour and that either takes time or money or both.
Posted by Technokitten at 11/24/2006 01:36:00 pm