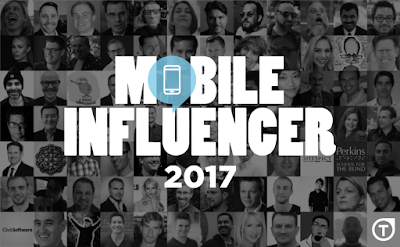 It's a New Year and that means predictions will be coming out of the woodwork wherever you look. The mobile sector is no exception and I took part this year to add my 2p to this report from Tune '76 Mobile Predictions for 2017'.

I'm afraid my response wasn't terribly imaginative compared with the others, but here it is:

The first point "Mobile usage is ubiquitous in Western markets" refers to the point that 'mobile' is a given. If your site doesn't work on mobile, then you're doing more than missing a trick, you're missing out on traffic, sales and brand equity. Mobile is truly the centre of a large part of our digital lives. The time we spend grazing content, playing games, chatting with friends, taking and sharing photos, is largely done on a mobile device in the Western markets that I'm familiar with.

My second point, "The big platforms will get bigger. Out of the big four – GAFA (Google, Apple, Facebook and Amazon), Apple may suffer, but only a little," is an observation that just as the rich seem to get richer, the largest organisations get larger and richer too. And in the mobile world, and particularly Western markets, GAFA are the big winners. I don't see them losing momentum in the near future. Of the four, I think Apple may stumble a bit in comparison to its glory years of late. But they have so much money in the bank, they'll work it out in the end, I'm sure. For other, more erudite predictions, check out the rest of the list here.
Posted by Technokitten at 1/06/2017 08:30:00 am No comments: Having spent some time researching the impact of new technologies on the work we do in the last couple of years, there is much in this article from BigThink that resonates.

We will, no doubt, lose jobs. Others will replace them but not at the same rate as the loss, I suspect.

I believe blue collar workers will fare better. That workforce has always had to adapt and is likely better prepared for change than their white collar counterparts.

Those working in legal services, accountancy, medicine will all see their jobs change drastically as more and more aspects of their jobs are taken over by software. Computers are already better at diagnosing cancer, standard contracts can be dealt with by a virtual lawyer. Even music for adverts can be written effectively by software and much faster and much cheaper than a human musician. So even the creative industries aren't necessarily safe.  Companies are on a constant mission to create efficiencies and to save money so they can create the most value for their shareholders. They wouldn't be doing their job properly if they weren't.

In the short term, robots and software will be colleagues rather than a total replacement and that will present its challenges. What will your relationship be with your robot co-worker, for example? For some this will be a blessing as it means less human interaction. (Many of my friends prefer online shopping for this reason). For others, a curse as they miss having people around them for company. I already have friends who freely admit they have a relationship with Amazon Echo's Alexa and if you haven't watched the film, Her, you should! It is entirely possible to have a relationship with a robot. On my visit to San Francisco last year, I found myself talking to a house robot as if it were a pet cat. Turns out it was Kuri and it has been a hit at this year's CES.

Longer term, the picture probably doesn't look as rosy. Regardless, change is afoot. That means we need to learn adaptability, flexibility and how to share the resources we have without demonising 'the poor' or putting students into debt learning things that will be obsolete by the time they graduate. It's a difficult topic to address as it impacts absolutely everything from what infrastructure we need, how we find meaning in life and what we do with our time. Lots to think about as this future gets ever nearer.
Posted by Technokitten at 1/05/2017 06:10:00 pm No comments:

Wanting and buying less stuff is not a new path for me. Buying less gets easier over time once you've made a decision to do it. I think I'd call it 'mindful shopping' and I think carefully over what I buy and what price I pay for it.

I'm also fortunate to have learned to sew as a very young girl which means mending, refashioning and making things from scratch is all doable and enjoyable so I don't feel I'm missing out on fashion. Plus, I have a large stash of fabric, patterns and haberdashery accumulated over the last 35 years. After all, I spent the best part of 10 years working in fashion retail, it's a hard habit to break. I also think fashion can be an artistic expression and getting it right (for you) can make a difference to how you feel.
My reasons for the buying and having less things were selfish. I have accumulated way too much stuff over the years and need to get rid of it. It's making my life more difficult than it need be as time is spent making decisions of what to keep, what to discard, how to recycle, how to store when I could be spending time and money doing other things. It makes my home environment untidy and difficult to organise. Bottom line, it's wasting my time and money - neither of which are limitless resources. This starts by not adding to the pile from buying needlessly or mindlessly.

I've been slowly shedding possessions for the last year or so. And it is a slow process. There's a lot to sort through to work out where to donate it, sell it, upcycle or recycle it. Throw in work and family commitments and the time to do it is limited. But I plan to continue on this path until it's done. When that will be, I have no idea but continue, I must.
The upside of this is that instead of getting 'things' as presents or choosing 'things' to treat myself with, I'm getting time with people I love and experiences of things I really want to do like going to the theatre, joining a craft workshop or walking in nature. These are all much better for my soul!

And as with my pescetarian preferences of the last 30 years, the ethics of 'less' came later but they're now part of my rationale too. I know retail is a large part of the economy, but it feels like the trend of 'less' is strengthening, not least as earning potential and the economy go down rather than up. This has implications for the retail sector, of course. And in turn, that impacts on the surrounding sectors such as advertising, marketing, packaging, distribution and more. This is not insignificant stuff but I'll leave the analysis on that one for another day when I've time to get an expert view on it from people smarter than me.

In the meantime, this is a good read around the ethical reasons for buying and having less. It's from a few years ago, but still relevant on re-reading yesterday.

And for those so inclined, the Marie Kondo books offer a way forward. You can get them on Amazon in all formats - the first one is The Life Changing Magic of Tidying Up and the latest version is Spark Joy - The Illustrated Guide to the Japanese Art of Tidying. You don't need both of them - either will do to get you on the path of less. And remember, less is subjective. There is no need to go for complete minimalism, it's finding what works for you.