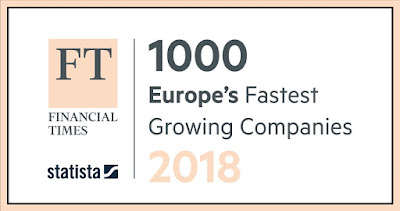 For those of you interested in start-ups and growth businesses, this list will be invaluable. It's a link to the FT 1000 which lists the companies in 31 European countries that have achieved the highest compound annual growth rate in revenue between 2013 and 2016. Note the measurement is revenue not profit.

It's worth a glance if you have any interest in business. The data is downloadable as a spreadsheet and searchable. The FT also shares their methodology.

I haven't heard of the majority of these companies. Am I out of touch? Maybe. Or is that successful companies very often get there completely under the radar? Or maybe it's down to my focus and visibility of British companies. I'm thinking probably the latter. Something for me to ponder on over a cup of tea...