The magazine supplement for this year's #emmas (Effective Mobile Marketing Awards) award winners dropped into my inbox today from David Murphy at Mobile Marketing Magazine. The awards were last month so some of you will already be familiar with the winners but in case you missed it, it's worth a look.

What struck me most about the range of winners and campaigns is that mobile marketing has grown up - mainstream brands doing large-scale, innovative campaigns. I guess it's about time, 15 years on, that this is happening.

So if you're after some inspiration about what's possible with mobile marketing, then take a look at this year's winners and check out their work.

A friend shared this video on Facebook earlier today and it raises (again) many concerns that I've had over the last year or two regarding social media scoring, gamification and how our data is used.

I've thought for some time that the flashing lights on our mobile screens are as addictive as slot machines. There are many games that require little or no skill whatsoever but just requires you to push your finger around a screen and in return you get the dopamine rush of a virtual reward. Whether that's a reward in game points, being told you're a winner, it amounts to the same thing - a bit of your screen lit up, and in turn, parts of your brain lit up. A cursory search on Google brings up many articles and research studies about this addiction.

And this addiction is starting at a very young age - children are playing digital games from being toddlers and the addictive nature of these games is apparent when you see how a child behaves when they're told to stop playing or their device is taken away.

At the same time, games can be great fun and are a way for many people to relax. So it's not all bad, as long as we're aware of when it may be getting out of hand.

And then we come on to social scoring. There are several companies like Klout, PeerIndex and their ilk who score people base on their activities on social media platforms such as Facebook, Twitter and LinkedIn. I've never been much bothered about my score but these are the social media equivalent of our credit ratings which brands and agencies can use to target for 'blogger outreach' or product promotions. Indeed, I'm sure these scores now feed into our credit rating as well and also feed into job applications and more. I guess that's a feature of living in the modern world and I can't say it's something I'm particularly happy about, nor do I feel I can do much about it either.

China takes these two concepts to the next level. Sesame Credit, the brainchild of Alibaba and Tencent, is a combination of social scoring, credit scoring, gamification (or the addictive nature of gaming) to promote and encourage 'good citizenship'. In China, that means compliance, falling in line and not criticising the government or those in power. The video above explains it very well and the BBC covered it a couple of months ago. The Chinese seem to have taken to the system like a duck to water and freely share their current score. Although it's not currently compulsory to participate, according to the video and the BBC, it will be compulsory by 2020.

What about the UK?

Well, I don't foresee that there will be a compulsory system imposed here, but the UK government has been spying on us via our telephone and internet activity for the last 15 years and keeping records on millions of British citizens according to El Reg. I'm sure every government is doing something similar.

Oh, and don't forget that the advertising industry is busy watching us too. Check out The Secret Life of Your Mobile Phone video below and catch the stage show if you can. It's brilliant. There's an audio available of their show at The Hay Festival (£1 to download).

Big Brother Is Watching You? You betcha. Merry Christmas! 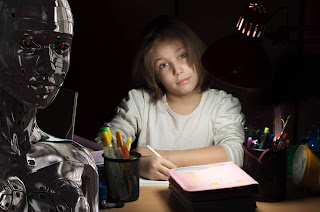 If you took part in one of mine and Lloyd's Future of Work events recently, you'll have heard James Tagg mention his book: Are The Androids Dreaming Yet? On Free Will, Creativity and Artificial Intelligence. The book has been listed as one of Kirkus Reviews Indie Books of 2015, which is lovely. And to celebrate, James has made the Kindle version free for download today and tomorrow (16th & 17th Dec). So don't delay, get your copy now and have yourself some brain food for Christmas.
Posted by Technokitten at 12/16/2015 04:52:00 pm No comments: 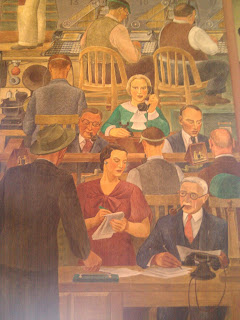 I recently held a series of five events with my friend and collaborator, Lloyd Davis, at Truphone's rather splendid offices in Canary Wharf. I did a round-up of all the events over on my Heroes of Mobile website so please follow the links below to see the videos of the talks and to find out more about what we covered and links to further coverage and reading.

Future of Work: Drones, Robots and Internet of Things with Priya Prakash

Future of Work: Augmented and Virtual Reality with Eva Pascoe

Lloyd and I are working up some new event themes for the New Year. If you're interested in hosting and sponsoring the next series in the UK in the Spring (it doesn't have to be London), please get in touch.

Hello Barbie - Is this the dream toy you've been looking for?

I used to have a Barbie doll when I was a little girl. I also had a Sindy doll and a Tressy doll (I’m showing my age now!) and I used to really enjoy dressing them and playing with them as any little girl would. I used to make them a lego kitchen to play in and I made them clothes to wear and a dolls house out of a cardboard box. I expect I used to talk to them a lot too.

Several decades pass and it’s time for a new kind of Barbie from Mattel. She's called Hello Barbie and is already sold out on the Mattel website. She’s interactive and can converse with children. She uses machine learning to improve on those conversations over time. As you can see from the clip, she does a pretty good job of those conversations too. She’s the first iteration of a robot Barbie, if you like.

For her conversation capability to work, it uses wi-fi and cloud storage and proprietary technology from ToyTalk. It records and listens to the child’s words. Sends that data to its main server, works out a reply and sends the right pieces of conversation back to the doll – all in real time. On one level, this could be very useful indeed to improve a child’s communication and speech skills. But there’s more than a little downside with the service.

Let's leave to one side for now the bit about encouraging children to have a deep relationship with an object.... (Ever seen Ex Machina or Her? If not, you should. Both great movies exploring our relationship with robots.) One of the main concerns for me is the smartphone app that accompanies the doll. As the parent (or buyer), you can set up the accompanying app to listen in to your child’s conversations with Barbie and even share them with other people. This facilitates helicopter parenting at its worst. Just no. Seriously. Don't even think about it. Let children be children. And give them some space to play, to imagine and to be. You really do not need to monitor every word they say or stalk them while they're playing.

This article on The Conversation goes into more detail about the issues around the service, the potential for hacking, the potential for collection of data and misuse of such data, and more.
Posted by Technokitten at 12/15/2015 03:49:00 pm No comments:

Ofcom Communications International Report 2015 is out

This is a personal favourite and highly recommend Ofcom’s various communications reports. For those outside of the UK, Ofcom, aka The Office of Communications, is a UK government department and produces a range of reports looking at communications usage across the UK. It’s a brilliant, neutral resource, and what’s more, it’s completely free. Find out more about the data sets and report.
Some highlights from this year’s International Report:


“The communications sector’s total global revenues in 2014 were £1,190bn, growing by 1.5% year on year (incorporating the telecoms, television, postal and radio sectors). Global television industries had the largest increase in revenue in 2014, up by £12bn (5%), to £244bn. Telecommunications revenue, although the largest by a considerable margin, registered slow growth of 0.5% to reach £846bn.

UK communications sector revenues were the fifth highest of our comparator countries and the second highest in Europe. In 2014, as in recent years, the three largest communications markets by revenue were in the US (£316bn), China (£135bn) and Japan (£110bn). Outside the top three, the total UK revenue of £48bn was second only to Germany (£55bn).

Around two-thirds (67%) of UK respondents use a smartphone. This is in line with France, Germany and Australia. Spain and Italy had the highest smartphone take-up, at 83% and 79% of respondents respectively, and the US reported the lowest take-up of our comparator countries, at 57%.

Spain (45%) and the UK (42%) have the highest levels of ownership of connected TVs (either smart TV sets, or sets connected to the internet via another device, such as a set-top box, video games console, or other internet-enabled device).

Nearly two-thirds (66%) of people in the UK had used an online service to watch TV or films within the past week (increasing to 81% in the past month); the highest proportion across all of the countries surveyed.

Around four in ten (44%) UK respondents had used a catch-up service from a free-to-air broadcaster within the past week, the greatest proportion of any country surveyed.”

I highly recommend you download the report and add it to your holiday reading list and gen up for the New Year.
Posted by Technokitten at 12/15/2015 03:12:00 pm No comments:

Today, I'm wearing a #TieForHelena. My friend Patrick wrote about Helena last week. She lives in Tooting, which is close to where I live and somewhere I pass through several times a week. She was attacked just yards from her home at 5pm in the afternoon on 9th December. it wouldn't even have been fully dark at that time and the street would have been lit.  She believes her attacker singled her out because she was 'rocking a tie'.


From the Evening Standard article:“Helena Martins, 43, who lost her hearing five years ago to Ménière's disease, was cornered by the man as she walked home through Tooting last night.

Moments before, she had removed her cochlea implant, which she relies on to hear, as she approached her house.

The man hit her in the eye and choked her with her polka dot tie, which she believes marked her out as gay, and her implant dropped on the floor.”

Being attacked for who you are or what you’re wearing has no place in London or anywhere else for that matter. And for that reason, I’m joining the campaign and wearing a #TieForHelena.