The Festival season has begun with Wychwood 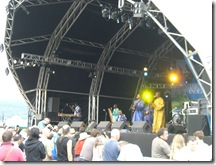 Yes, it’s festival season folks. And some of you may know that I’m pretty keen on the whole festival vibe although I don’t get to go to as many as I’d like to. Glastonbury is a main attraction for me as it has simply become too expensive to go to the Electric Picnic these days. And this year, I was lucky enough to kick off the festival season with the lovely Wychwood Festival.

I happen to know someone who knows Wychwood’s organisers which meant I got invited to join the bloggers team on site. So with a free press pass in my mitts, I headed off to Wychwood last Friday.

First off, this is a relatively easy festival to get to. It’s held on Cheltenham Racecourse which is not far from Cheltenham town centre so if you’re on public transport, you can get a bus from the train station, or a taxi. And if you arrive by car, there’s loads of parking available. You can even drive to where you want to pitch your tent so you don’t have to lug your stuff everywhere. That’s a first for me. And even if you didn’t drive your stuff to the campsite, it’s only a five to ten minute walk from the festival entrance anyway. This is easy-peasy, hassle-free festival-going.

The campsite was well organised. Plenty of clean loos with toilet paper *at all times* (and if you’re a regular festival-goer, you’ll know that fully-stocked loo paper is a rare sight) and frequent water points. And showers. Yes, showers. And where we were camping, it was kept very clean and tidy by my neighbouring campers. There was a 24-hour cafe tent in the camp site, a 24-hour property lock-up run by Birmingham Friends of the Earth (like the lock-ups I volunteered for at Glastonbury last year) and a shop selling everything you might need at a festival from batteries to Mr Kipling’s cakes.

And then on to the festival site itself. Now this really is easy festival-going  - concrete pathways, flushing toilets in the grandstand, loads of food stalls, including festival favourites, Pura Vida and even a Pizza Express. Waitrose was also prominent on site with trailer where kids could learn how to make smoothies and a rather lovely cocktail bar (£4 for a cocktail isn’t bad value at all and the chairs were really very comfy). The Pimms bus was also very popular and the English Tea Bus serving cream teas with china cups. It was delightful. And if you were in a wheelchair, then disabled access is really rather good.

There were also three other bars run by a local brewery with bitter at £3 a pint and lager at £3.50 a pint. One of the bars, The Stagefright Bar, also hosted the BBC Introducing Stage which was really rather good. They showcased bands from the neighbouring counties hand-picked by the BBC team.  There was definitely some up and coming talent on show there. I particularly enjoyed The School and Kill It Kid. Two bands to watch.

If you have young children, this festival really is for you. In fact, if I were to criticise the festival in anyway, and this would be a mild criticism, I would have liked to have seen more non-music entertainment that had adults in mind. Yes, there was comedy in the Stagefright bar between 10pm and midnight, and there were some films in the film tent but there wasn’t the usual performance sideshows you might see at any number of other festivals. Maybe it’s not needed and maybe my expectations have been coloured by other more adult-orientated festivals.

But back to the children – smoothie-making workshops, funfair rides, music workshops, circus skills training, story-telling, silly science, Mr Tumble in person, arts and crafts, there was more than enough to keep your under-10s entertained and engaged for the whole festival. And what a safe place for children to run around and make new friends.

And for the grown-ups there was shopping, food, drink, the healing area (which was a little tucked away and I only found it on the Sunday afternoon) and of course the music. It’s an eclectic line-up – and deliberately so – with a world music and slightly folky/bluesy vibe with a bit of retro thrown in for good measure for the 30- and 40-something parents. Big names included The Levellers, The Lightening Seeds, The Leisure Society (they were on in the wrong slot – they should have been on Saturday early evening or Sunday afternoon I think), Pauline Black of Selector Fame, Seth Lakeman, The Happy Mondays (or should I say the Happy ‘one of us was once in the band’ Mondays as it was Shaun Ryder with session musicians, but fun nevertheless) and my favourite of the weekend (as I missed the Leisure Society), Dreadzone.

So what were my highlights? Friday night was my best night without a doubt. I ended up chatting to lots of new people randomly in the beer tent (including the lovely Kevin from the Box Steam Brewery), and just when the comedy was finishing up, three ukulele players (or more specifically, Tony and the Ukuholics – podcast here) started playing and carried on playing for about an hour and a half. They got quite a crowd together with their style of ukulele karaoke and covered classics including Ernie which I haven’t heard since I was a nipper listening to Tony Blackburn and Arnold on Saturday mornings. (If this is your thing, then you might also be interested in the Ukulele Festival of Great Britain happening in Cheltenham this weekend). The ukuoke was followed by a magic couple of hours in the Headphone Disco. The samba workshop was also fantastic, as was the drumming circle late on Saturday night. Thrill Collins were great, headlining on the small but perfectly formed, Pomme Stage – think 80s and 90s choons in a skiffle style and of course, festival favourites, Dreadzone were spot on.

So, if you’ve ever considered going to a festival but weren’t sure about the whole camping and mud thing, then I’d say go to Wychwood and cut your festival teeth there. It’ll be a breeze!

So overall, thumbs up for Wychwood Festival 2010. I’ll be back (if they’ll have me).

Wychwood tweeting: wychwoodfest  and wychwood  and the official feed @wychwoodfest

The Independent’s review of the festival

And when my broadband permits, I’ll upload all my pictures and video clips and add them here.