I know I haven’t been blogging as much of late. It’s just so much easier to play on twitter. But I’ve made a sort of pact with myself to do more blogging this year and better capture some of my thoughts, projects and reading. I can’t promise I’ll keep it up mind, but let’s see how we go…

There’s a new UK Strategy Group which is looking at the Future of the Internet. Details about this Technology Strategy Board initiative is here. This is as much as I know about at the moment, but it’s something I’ll be keeping an eye on.

Victor Keegan’s (no relation!) view of the upcoming challenges for the mobile phone including LBS (location based services) and metadata so that we know more about where we are and who we are to give more relevance for mobile services.

Nice use of SMS for customer service by La Trouvaille restaurant in London’s Soho is noted here.

I’m pleased to be the first Female Friday interviewee for GomoNews. The fairly in-depth interview is here outlining my journey into the mobile world, what I think of mobile marketing and, in particular, the role of SMS and mobile internet.

I’ve been travelling a fair bit too. I had the pleasure of speaking at Hostelworld’s annual international conference for hostel owners in Dublin last week. Cian from GomoNews was in attendance so he captured my keynote speech including tips and hints on how to do mobile marketing on a tight budget.

As an aside, Hostelworld has launched its iPhone app which has done amazingly well since its recent launch.

A comprehensive article on the smartphone market by Guy Agin. Well worth a read to put the different smartphone vendors and platforms into some kind of perspective and redraws the mobile platform map and explains the graph below in more detail.

Conceptual design and thinking behind a ‘five year phone’. Food for thought, especially after our Mobile Monday London goes to Brighton event on sustainability in mobile back on 18th January.

Yes, it's that time of year for folks working in mobile when it's all about Mobile World Congress in Barcelona. I've had a bunch of expo passes to give away, courtesy of the lovely folks at BlackBerry who were our lead sponsor for Heroes of the Mobile Screen conference http://mobileheroes.net. I've now allocated all the passes via the Mobile Monday London Yahoo! group, but I'm very aware that not everyone managed to get one so these places will be worth a try to get one:

I'll be running Swedish Beers - http://swedishbeers.org - on Wednesday evening 6.30pm until late at Dostrece. Admob - http://admob.com - is our lead sponsor and I'll have more sponsors to announce in the coming days.

More news and info as it comes...

SMS continues to grow in the UK

The Mobile Data Association has released it’s latest SMS and MMS usage figures for the UK. And interesting reading they are too. MMS or picture messaging is still a tiny proportion of overall messaging, but it is there and it is increasing.

Seasonal drivers still appear to propel the use of Picture Messaging, with 4.5 million picture messages being sent on Christmas Day itself – hence the spike in traffic in December -  while Network Operators’ figures also indicated an upturn in picture messaging during the recent cold snap. I’m guessing lots of people were comparing the snow in their area with friends and family.

Assessing the findings of the MDA’s report, Rob Bamforth, Principal Analyst at Quocirca, said: "New generation touchscreen handsets and the bundling of SMS messages into many tariffs has made texting easier, and seen its role develop. Now it is not only a convenient medium for a quick chat with friends, but also a way of participating in television voting and raising funds for needy charities. When a powerful call to action is given, the population of the UK often turn first towards their mobile phones." This is borne out with the recent campaigns to raise funds for BBC Children in Need and the DEC appeal for Haiti. 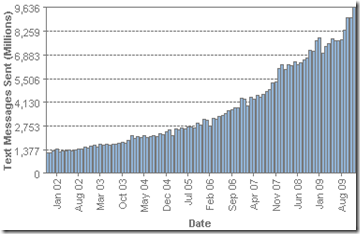 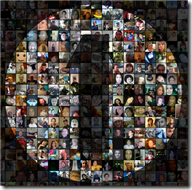 Campaigns like the Radio 1 Free MMS Day appear to have had an effect on the figures by attracting 42,000 messages to the BBC radio station in just 24 hours with viewers contributing to an online mosaic of all their images (moderated of course). Let’s see if MMS continues to grow in 2010. The growth rate between 2008 and 2009 was just 9%, averaging 1.6m MMS per day. However, I’m in no doubt that SMS will continue to grow in 2010 and beyond. 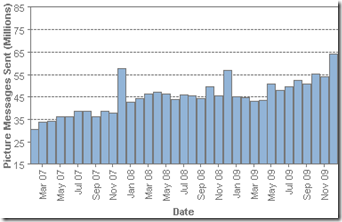 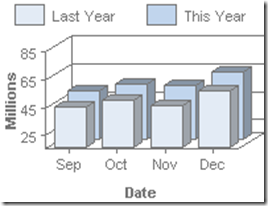