A few links on a Wednesday evening

I have so many Firefox and IE tabs open that I thought I should share some links with you all of what I've been looking at over the last few days.

Estonia becomes the first nation with mobile voting. Ok, it's a small country, but still, an interesting development.

Youth are not interested in mobile marketing. Graham Brown from Mobile Youth shares his thoughts on the matter.

There's a job going for an artistic hermit at The Manchester Museum. Actually, it sounds like a really interesting project. I'm wondering how I could blag my way into that one.. how does one qualify as an 'artist' these days?

Over the past year, 300 pupils in the UK have been involved in an experiment to use mobile phones in lessons to record movies, take photos or set homework reminders. Reporter Anna Lacey visits Park House school in Newbury to find out whether the project has been a success for the BBC. I'm very pleased to see mobile technology being used for educational purposes.

Mobile Awesomeness - a showcase of top mobile websites from around the globe.

Taptu whitepaper on making mobile search social (they've also just raised a nice bit of funding too as it happens).

Insights into iPhone usage from Nielsen. It's US centric but it's still an interesting read even if you're not in the US.

Cellphone shopping makes wallets redundant in Japan from coupons to using your phone to pay for stuff. It's only a matter of time before it happens here in the UK too as the O2/Telefonica NFC trials were very successful.

Mobile beats full-fat internet in ROI study from Quattro and comScore. The most interesting point for me is that the comScore/Quattro Survey found a significant percentage of the audience to be “mobile only” visitors to the measured brand destinations. This is consistent with other research I've been looking into in mobile usage in the UK. There appears to be a growing band of mobile-web-only customers.

From the figures there is certainly a male youth bias but it's not as strong as one might have thought, especially with smartphone ownership being significantly higher in men than women. Overall there's a skew towards men at 59% vs 41% women whereas PC internet usage is pretty much even. And 25% of the UK are using the mobile internet which is also very encouraging.

I've also been looking at some interesting research conducted by itsmy.com regarding their customer base and attitudes to mobile social networking and the mobile internet. It's also well worth a look (it's a free PDF download). There were a couple of particularly interesting things to note... there's a growing base of mobile only customers who also don't have an email address. And mobile internet usage is evenly split on itsmy.com between men and women... so I would suggest that if you give women what they want, they're as likely to use it as men.

I spoke at the Future of Mobile conference recently and stated silly mobile tariffs were holding us back as an industry. And they are silly. They're complicated, there are too many of them, there's lots of very small print (which I can't read even *with* my glasses on), extra roaming charges on a per megabyte basis (who knows what a megabyte is anyway and how do you know the size of a page *before* you click on it?) and well, they're just so unnecessary.

And if you don't believe me, go take a look at MobileMeg who has attempted to collate all UK mobile data tariffs (albeit I suspect it's a little out of date as I know Tesco has recently introduced a new mobile data tariff - yet another one!). It's not pretty and it's not clever. Network operators - sort it out! Complexity is not a good thing.

Papa John's generates $1m in sales in the USA 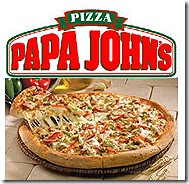 I've just been reading about Papa John's foray into mobile commerce over at Mobile Marketer.

"Pizza chain Papa John’s International Inc. has generated more than $1 million in sales from mobile Web orders in less than six months after offering that option to consumers.

The milestone comes after Papa John’s earlier this year crossed more than $1 billion in overall online sales – up from $400 million in 2007 – and launched a Facebook page that quickly attracted 175,000-plus fans in less than a week. The mobile commerce push led to the introduction yesterday of an iphone site for Papa John’s."

So it looks like Papa John's is doing pretty well then. 1% of overall sales via mobile sounds about right to me. And no mean feat to accomplish that within 6 months of launch.

You can see the mobile site at http://www.mobile.papajohns.com. It's completely reliant on setting up an account with Papa John's which can all be done from your phone and once registered you can link through to your local Papa John's menu and delivery options. You can also use the related SMS service once you've created an account. It remembers your favourite pizzas so reordering is faster.

The also note that the digital orderers of pizza are typical Papa John's customers and are not specifically youth or after smaller orders (which makes sense to me as you do have to register and can't just order off the cuff - of course once registered, it's easier the next time). And I suspect the iphone application is even easier to use. And of course it makes perfect sense. You can order your pizza from the bus or train on your way home and you arrive home at the same time as your pizza. Brilliant! Certainly less annoying than shouting your order down the phone with the rest of the passengers listening in to what you're going to have for dinner.

Admittedly, I don't order pizzas very often, but I just might if it was that simple to do from my phone already without having to hunt for the leaflet that got stuck through the door and probably went straight into my recycling bin anyway.

I remember talking to Papa John's agency in the UK many moons ago about a very similar service but the idea was ditched in favour of printing more leaflets. But then that's another story...

Yes, I'm still blogging here from time to time, but frankly, I just don't have the time to write up all the stuff I want to write about. Don't panic, I'm not going to stop writing here but I am doing quite a lot of microblogging which you may be interested in. So rather than miss out, you can always follow me on twitter instead where I'm known as technokitten. I talk about lots of random stuff there, including a few juicy snippets and links on articles related to mobile so feel free to add me. You don't have to join in the conversation if you don't want to (although you'll get more out of it if you do), you can simply lurk if you prefer. And yes, I do keep my profile private so you'll have to ask permission, so please make sure I can tell that you're a real person (i.e. a photo of you, a short bio and a link to your blog or website is *really* helpful) and not some kind of spambot or serial killer.

Welcome to the twitterverse...