I was just reading about Mark Logan's thoughts on mobile marketing principles over at bemomobi. He breaks it down into 4 categories:

These are not dissimilar to my 'Key Success Factors' slide that I use in training and seminars. However, Mark has missed a critical point - getting personal isn't enough. What Mark has missed on his list is the fundamental "Permission". He talks about 'embracing user control' but this isn't quite the same thing so I'll elaborate as to what I mean... 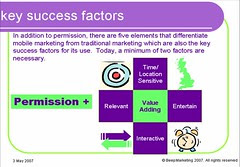 You need permission before you do anything mobile. The assumption is generally that you need a list of mobile numbers to begin with but this isn't necessarily the case. Yes, a list can be useful, if it's opted in (that's the law) and has a close link between what customers signed up for and what you want to tell them (ideally being your own list as many, although not all, third party lists are dubious in their effectiveness). Permission is also when a customer texts back in response to having seen an advert on the TV, in print or heard it on the radio or seen something on a packet of crisps or can of drink. In texting in, the customer gives permission for you to reply back, thus starting the conversation.

Mobiles were designed for communication and so it's a two-way street. No longer can you send out one-way text messages - you must allow the customer to reply - not least so they can unsubscribe. (Lakeside, when are you going to do something about this? - I'm *still* getting SMS from you with no reply path). Not all customers will reply to you, but some will. Some will say thank you, some will have another question, some will just want to give you feedback (both negative and positive) and a fair few will tell you to s*d off (you can take that as an unsubscribe request). Indeed, in my ZagMe days, one chap texted in to tell us he'd dedicated a record to us on Capital FM - praise indeed.

So, don't do anything without permission (although on it's own, it's not enough) and keep the lines of communication open so that people can reply to you.
Posted by Technokitten at 5/08/2007 01:15:00 pm