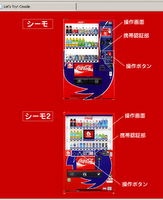 I saw this web page (it's in Japanese) and I figured it was showing how to pay for soft drinks with your mobile phone. So to double check, I asked my friend, Jan from W2forum, to translate it for me to make sure I'd got it right. I've got some screenshots here too.

It seems I did. There are two ways to pay - either oyster-card stylee with a 'wallet phone' which is pre-installed. Or if you have a less fancy phone, then you need to download an application you can charge up with credit and then you buy a drinks coupon. This displays as a QR code on your phone's screen. You then hold it up to the reader on the machine and you buy your drink.

Jan then adds that it has a rather interesting loyalty point scheme which he was just writing about in a report which I can share here. 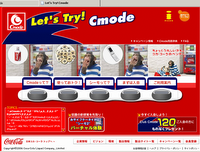 "Coca Cola uses the mobile phone as a loyalty point system for their Cmode mobile-enabled drinks vending machines in Japan. consumers can use NFC (near field communication) or a QR code generated by an application installed on their phone to purchase drinks at Cmode vending machines. For each purchase, consumers earn loyalty points which are stored on their mobile phone. As the number of loyalty points increases, the consumer's loyalty ranking 'levels up' and the number of loyalty points earned per drink purchased also increases. Consumers can redeem loyalty points as free drinks at a vending machine, or on digital content such as screensavers and wallpapers at the Coca Cola mobile site. To use the loyalty scheme, consumers must first register to become a member of "Club Cmode". Club Cmode provides Coca Cola with the opportunity to interact with their consumers as well as promote new products and sell mobile content."
Posted by Technokitten at 8/25/2006 10:44:00 pm