I go to the theatre a lot and inevitably, at some shows, there will be a mobile phone that starts ringing part-way through the performance. You think you've turned your phone to silent but for some reason it isn't silent. Mistakes happen. I can ignore it. It happened once to me. A phone, for whom nobody knows the number (it has a US number), started vibrating in my bag. I didn't react because I didn't think it could be my phone as no-one knows the number so who would be calling me? It turns out it was my phone and it was some spammer bulk dialling and taking a chance on the number being live.

I must admit, I don't like it when I can see someone has their phone screen on during a performance. Those screens are really bright and when you're plunged into darkness in a theatre, if you're upstairs in the Royal or Upper Circle, you can see a phone light go on straight away. It's distracting. If there were a persistent offender sitting near me, I would probably have a word with them. In the same way that I would have a word if someone was talking during a performance. I don't have to do it very often, but I do do it.

Unfortunately, calling out poor etiquette can have consequences. Just last week, The Stage reports that there was an incident at The Old Vic in London. Adam Gale, a theatre producer from New York witnessed a woman using her mobile phone throughout the first half of a performance of A Christmas Carol and asked her to stop using it. I think that's fair enough. I would probably do the same in the same circumstances. Unfortunately for Adam, during the interval, the woman's partner punched Mr Gale and the couple left the theatre. The theatre confirmed that there had been an altercation between three people over a mobile phone.

It's not the first time I've read of tempers fraying in a theatre over the use of a mobile phone. Arguably, it's something that ushers should be dealing with more promptly. However, ushers are not particularly well paid and they're generally young people and potentially may be reticent to intervene in case it causes aggravation.

Some are calling for a zero tolerance policy for mobile phones in the theatre. In China, they use lasers to shame patrons using their mobile phones during a performance. Numerous examples of actors calling theatre-goers out when their phone rings or they can see the light from a mobile screen are noted here. Back in 2015, Benedict Cumberbatch made an impassioned plea to the audience about restricting their use of their phones to outside of the performance. The problem persists.

And there will be some cases where it's important for someone to be able to access their phone during a performance - a doctor on call, for example. Or, as I experienced this week, there was a reviewer taking notes about the performance I was watching and using his phone as a torch. He was using it as subtly as possible with the screen turned towards the page and we were both at the back so unlikely to distract anyone much. Once I could see what he was doing, I put it out of my mind. In both instances, I would ask in that people turn their screen brightness right down. It helps a bit.

Meanwhile, theatre desperately needs publicity about shows and performances that are best shared via mobile devices. They need the tweets, Facebook statuses and Instagram photos so that the word gets out about the show. Yet, theatres can be very tough with theatre goers about taking a photo of the stage on arrival, for example if you're checking in to Swarm or Facebook. That seems to me to be over-zealous. There's a big difference between a pre-show selfie and a mid-show recording. 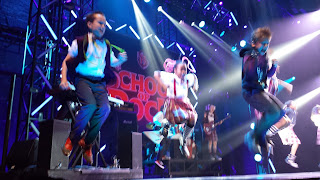 Occasionally with shows, the audience is encouraged to get their phones out and take photos and video. They do this at the end of School of Rock and it's a touch of genius. It's at a point in the story where it feels most like a rock concert and phones are most definitely part and parcel of a rock concert. The genius part of it though is that the audience take hundreds of amazing action shots of the show and immediately share them with their friends and family telling them how fantastic the show is. (And it really is a fantastic show).

Zero tolerance is not the answer. You really don't know the reason someone has their phone on. There might be a valid reason. And there will always be fellow theatregoers who munch or talk their way through a show. I dunno. Maybe some relaxation of photography rules pre and post show coupled with a firmer stance from (trained) ushers during a show may pay dividends.

And let's not mention the annoying lights from a smartwatch or Fitbit...