It probably comes as no surprise that the end of January is prime time for quitting one's job. Such a big decision doesn't come easily and it can take several months to get to that decision and to find another job to go to. Often the Christmas break is the catalyst for change too. Taking time off over Christmas gives you chance to take stock of what you want to do for the next year or years.

From the work I did a couple of years back about the Future of Work, there is not only a skills gap in the UK, especially where technology is concerned, but technologies such as Artificial Intelligence, mobile computing, cloud computing, internet of things and robots is also impacting on the kind of work we will be doing and what jobs will look like in the near future. I touched on this a little in last month's posts, 'What do you do when your boss is an algorithm?" and 'What three things should we teach in schools?'.

And it got me thinking about what skills are required to future-proof oneself and then I was reminded about the World Economic Forum's Future of Jobs report from January 2016. Even though it's two years old, it's still relevant. And rather handily, there's a graphic showing what the Top 10 skills required were in 2015 and the ones anticipated in 2020 (which isn't very far away). 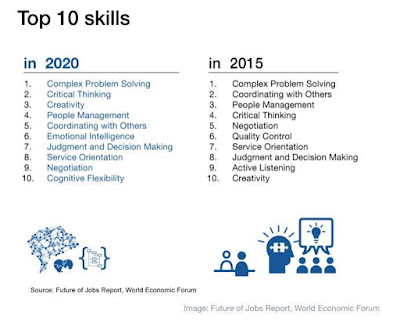 Interestingly, complex problem solving is still number one. However, critical thinking and creativity have moved up the charts to 2nd and 3rd position. Critical thinking and creativity are things that Artificial Intelligence cannot do. There's no question that computers can crunch data in ways humans can't, and a computer can even create artistic works. A death metal album from DaDaBots is one of the latest offerings. You can read more about that here. However, the computer that has 'learned' about complex death metal will not wake up one day and decide to create an album of music that is completely original. In the same way a computer that can generate Picasso-like pictures, will not suddenly wake up the next day and generate the kind of artwork that Tracey Emin might come up with.

This stresses to me that in order to be future proof, we need to nurture our creative sides more. In fact, one school in Bradford, in the North of England, found that they improved scores in mathematics without teaching more maths but by spending more time on learning and practising music. It's an incredibly powerful case study and can be found over on Big Think.

So if you're thinking about what your next career move might be, or you're a student and wondering what prospects are ahead of you when it comes to work, you could do worse than consider what skills are required and gen up on the Future of Jobs free report from the World Economic Forum. The full report is here or you can check out the Executive Summary here (PDF).