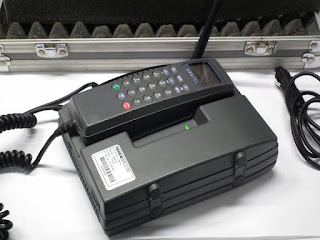 It's hard to believe that SMS, or short messaging service, or text message, is 25 years old. On December 3rd, 1992, the world’s first text message was sent. Fittingly, given the time of year, it read, “Merry Christmas,” according to TechSpot.

The first text message was sent by Neil Papworth over the Vodafone GSM network here in the UK. At the time, mobile phones weren’t capable of sending texts, so Papworth typed the message on a computer and sent it to an Orbitel 901. This wasn't a mobile phone, rather a telephone with a small digital display (pictured).

Text messages took off quickly in Europe but took longer to catch on across the pond in the USA due to the way US Mobile Network Operators (aka Carriers) were structured and how they priced their services.

It was SMS that brought me into the world of mobile marketing back in 2000 when I joined location based mobile marketing company, ZagMe. Our pioneering service was about sending text messages to shoppers whilst they were actually shopping at UK shopping malls - initially Lakeside and Bluewater, but with an aim to scale beyond that. We weren't quite the first to use text messaging for marketing, but we were the first to do this based on location. (For a short history of proximity mobile marketing, there's an article I wrote and accompanying video if you follow this link.)

At that time, young people had cottoned on to SMS and were using it to the exclusion of anything else. Voice calls weren't the done thing if you were a teenager. SMS was where it was at. Premium SMS was also used as the delivery mechanism for ringtones and logos (remember those?) and mobile games (snake anyone?) to small screen phones like the Nokia 3310 or the Sony Ericsson T68. Remember those phones? Parents were the next to cotton on to text messaging as a necessity for keeping in touch with their touch-texting teenage offspring. Others came later to the SMS party.

By 2012, mobile users in the U.K. were sending 151 billion texts a year. In recent years, that number has fallen quite dramatically. As of this year, users in the U.K. only sent 66 billion text messages. That's not to say people aren't messaging each other. They most certainly are, it's just they're using different apps and services to do it - Facebook Messenger, Whatsapp, Snapchat, even email. Why would you pay for SMS or bother with a SMS bundle when you can get other instant messaging services for free with your data bundle - data being much more of a necessity these days than SMS.

I know from my own experience, that I send hardly any SMS at all and I receive very few personal ones. I've been thinking about how I use SMS... I occasionally use it for messaging someone and those who I use SMS with tend to be older and don't tend to check their email much so SMS is still more immediate for them. I also use it to send voice messages to my Mum's landline. When I travel by train to visit her, I usually message her from the train to confirm that I'm on the train and what my arrival time will be, or let her know if I'm delayed. In that use case, SMS is key because mobile coverage is so patchy when crossing the country. I also use it for 2FA (two factor authentication) for some services. I get occasional marketing messages by SMS. And I get all GP and hospital appointment reminders via SMS.

So, SMS is not dead, but it's most definitely feeling its age. In mobile years, 25 is very old indeed. It still has a use and I think it should still be available on our mobile devices, but it's definitely the poor relation compared with WhatsApp and their ilk.

How about you? Are you still a SMS addict or have you moved on too?