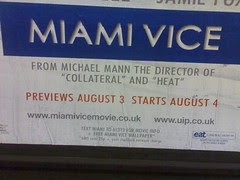 since when did 25p = FREE?
Originally uploaded by technokitten.
You'll notice the small print at the bottom of the campaign for the new Miami Vice film as seen on a poster on London Underground this morning (20/7/06)...

So that means, it could cost you 37p for your "free" wallpaper. Hmm. Wonder how they're getting away with that then?

I tested the service. It's a bit rubbish. I got my wap push ok but there was no supporting SMS in case I didn't get the wap push or lost it in my inbox (which happens on some handsets - and until I connect to wap, they don't know what handset I have).

Then I got the freebie wallpaper picture on the left. Oh dear. Not well designed for mobile. You can't see what the pictures are supposed to be, you can't read the writing under the film title, and most importantly for a film promotion, the opening date isn't on there anywhere.
This is definitely a case of "let's just repurpose what we already have" rather than "let's make something that will actually work on mobile". My preference is always for the latter ;-)