Rodelinda - a tale of obsession 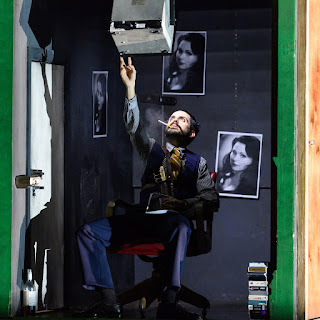 I was fortunate to go to the opera last night to see Rodelinda by Handel at The Coliseum.

As I've previously mentioned, I'm no opera buff which is partly why I'm drawn to going to the opera so I can learn more about it and why and how it stands the test of time. It's certainly out of my comfort zone. I don't enjoy it in the same way I enjoy a musical like School of Rock or a play like Ink (I've seen both recently and both are excellent by the way and well worth seeing). But I do get enjoyment from opera most of the time. And this was one of those times.

I've never heard of Rodelinda and I had no idea that Handel even wrote any operas which shows you where my level of knowledge is. I'm familiar with The Messiah and Zadok the Priest but not much else by Handel. I don't even know very much about Handel as a composer so I was intrigued as to what I would be watching. At the very least I knew it would be good as it's the ENO, but whether I would like it is another matter.I needn't have worried. This production is very enjoyable indeed with beautiful singing, stunning set and great acting.

Director Richard Jones has brought the story of Rodelinda forward to Fascist Italy and brings attention to the obsessional element of the story. The King of Milan, Bertarido, is deposed and sends word that he has died with a view to returning in disguise to save his wife, Rodelinda, and son, Flavio. Meanwhile Grimoaldo has seized the thrown and has designs on Roselinda for his wife. Garibaldo, one of Grimoaldo's allies, has designs on the throne himself and plots with Eduige to do so. Eduige complies as she's furious with Grimoaldo for making a play for Roselinda when he's already betrothed to her. Unulfo is working for Grimoaldo but secretly helping Bertarido.

The common theme that I took from the opera is that of obsession. Grimoaldo is obsessed by Roselinda. In this production he has secret cameras set up to follow her every move whilst she is imprisoned. He spends his days lusting after her and working out ways to win her for himself. Eduige is obsessed by Grimoaldo. She wants him for herself because she wants the power he already has and the power he has taken in usurping the throne. Bertarido's obsession is his wife, and to a lesser extent, his son. Garibaldo is obsessed with power. He will go to any lengths to get it, including violence. Unulfo is secretly obsessed by Bertarido which means he's happy to double cross his boss, Grimoaldo. Roselinda is tormented by her grief at losing her husband, Bertarido.

All this obsession results in circular thinking, plots and subterfuge and violence and threat of violence and unintended consequences. It shows the audience how skewed we become when consumed by obsession of any kind. The story is more gripping than I was expecting - much enabled by the set and 1940s setting and the intense atmosphere it portrayed.

What was surprising was how the very old but beautiful style of music was juxtaposed with the modern setting but still worked really well. The orchestra were using instruments of the day and that even included recorders (who knew that the recorder could sound so beautiful!). The singing is also of its day. The good guys (Bertarido and Ufulfo) are countertenors and are hitting high notes as high as the female singers. And it was very beautiful and full of emotion and was definitely masculine despite the high register. What also worked well was the repetition of phrases in the singing. This added to the intensity of the scenes and accentuated each one's obsession. What I also loved about the production was the wit in both the translation of the libretto and the acting in some of the scenes. There were some laugh out loud moments which balances out the darker themes in the opera.

I won't tell you any more of the story here. Rather, you can google for a more detailed synopsis, or better still, go and see the opera for yourself. It's running until 15 November at The Coliseum. You can book tickets here.

Tonight, I went to a talk about the future of blogging and communications in a world of AI. I'll write about that tomorrow and revisit some of the work I did on that a couple of years ago.

Also, Day 2 of NaBloPoMo done! Thanks for reading.