I'll be honest, I was struggling a bit to think about what to write today. So for some inspiration, I thought I'd take a look at what I and fellow mobilists were writing about on this day in previous years. In doing that, I was reminded of the Carnival of the Mobilists. It started in 2005 and the idea was that a blogger would do a write up of the week's writing about mobile. If you were a blogger, you could submit your article to be considered for inclusion. In this way, readers could discover more blogs and writers could attract more readers and followers. And it worked I got to know many other bloggers as a result and it was a good discipline to read beyond your normal remit.

So let's take a look back at what we were thinking and writing about back in November of years past.

November 2006. Rafe Blandford, writing his All About Symbian blog back then, wrote CoTM #52. Links include thoughts on Ajax, java and flashlite. Youth trends are covered. There's an review of the Opera Mini browser (we had smaller screens and less capability back then, remember). There's also a review of the Nokia E70. And of course there's talk about advertising, this time embedding them in ringtones. Check it out. 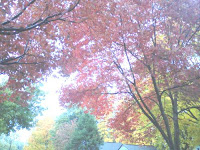 November 2007 and it's Mark Hooft's Ubiquitous Thoughts turn to host CoTM #99. His specialism is mobile learning which he looks at but he also covers Google's Open Handset Alliance which was the previous week's big mobile announcement. He also talks about mobile marketing - needing simplicity and also a link to Jan Chipchase and thoughts about design based on what you know about your consumer. Check the links here.

Mark Hooft also hosts CoTM #149 in November 2008. There's been a US Election and Barack Obama is the President. There's been a conference about Handheld Learning in the UK and the Mobile 2.0 event in San Francisco. Round-ups of both are included. Money and the economy is a key theme this week also. We were right in the midst of the credit crunch at the time. Survival was key, and arguably, still is key. More here.

November 2009 and it's CoTM #200 at Jamie Wells' MobileStance.com The main theme in this week is Google buying Admob for $750m. Wow, 8 years ago. Time really does fly. Anyway, there's lots of chat as to why it's a good thing (or not) and why Google got a bargain. There's also some good thoughts about the uptake of mobile banking. And some other stuff too. Check out the edition here.

In November 2010, Andy Favell of MobiThinking takes the helm. He must have had a reorganisation of his website as it's dated December, but according to Volker Hirsch, this was from mid-November 2010. Here's that week's Carnival. There are some interesting posts covered with topics including mobile music, network operators struggling to own the social graph, thinking about branding and marketing on mobile, mobile commerce and fragmentation and the legal issues around films on iPhone.

In stepping back in time for this post, I'm astounded about how much good writing and thinking about mobile was going on back then. But also sad to remember that at least two of the prolific contributors to the carnival have now passed on - Judy Breck of Golden Swamp and just last month, Carlo Longino of Mobhappy and TheFeature. I'm also sad to see some of the blogs linked to are no more, including the site that used to be the home of Carnival of the Mobilists. I think the history of our industry is important. We need to know where we've come from to help us work out where we're going and where we don;t want to revisit. Hey ho. Such is life.

Email ThisBlogThis!Share to TwitterShare to FacebookShare to Pinterest
Labels: carnival, carnival of the mobilists, history, nablopomo, nablopomo17, nablopomo2017, on this day