The search for a kettle commences

Yes, that’s right. The search for a kettle has started for the Russell Hobbs K1 from 1955. So yes, it’s an old kettle, but not just any old kettle if you see what I mean. Apparently the K1 was the first kettle in the world to turn itself off once it had boiled rather than you having to wait to turn the kettle off yourself before the kettle boiled dry. The K1 solved the problem with a valve switch that turned the power off when the steam from the boiling water passed through it.  Cool, huh! 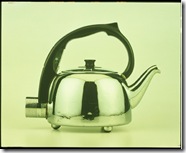 So the folks at Russell Hobbs are asking people to tweet their pictures of their K1 to @russellhobbsuk, put them on the Russell Hobbs UK Facebook page or upload them to the Russell_hobbs_uk  Flickr group. Each person who sends in a picture of a kettle they think might be the K1 will win a 10% discount off a Russell Hobbs purchase and Russell Hobbs promises the lucky owner(s) of a K1, the full Russell Hobbs unique Heritage Collection.

Jason Steer, European Marketing Director comments: “Despite all the nice stories we hear about the newer K2 product we sadly haven’t been able to track down a working version of its older brother the K1, and this is why we have decided to launch this competition to find a fully operational version. We would like people everywhere to check in their relatives’ attics and basements – anywhere they think one could be hidden”.

Sadly, I know my Mum will have been too fastidious to keep an old kettle lying around but maybe your Mum or your Gran still has one and it’s still making a good cuppa?