The Trouble With Big Cities 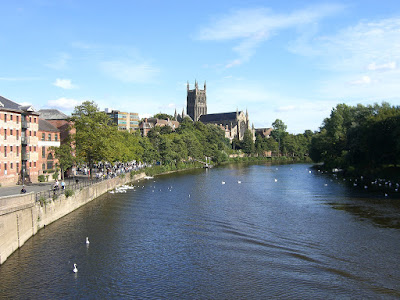 Although I live in London, I spend a lot of time with my Mum in the city where I grew up. I say city, but Worcester is actually very small when it comes to town and city sizes. And it's a long way from anywhere. It's quicker for me to fly to Barcelona than it is to visit my Mum. Worcester suffers on the GWR Hereford to London line as part of the route is single track through the Cotswolds. I read somewhere that the train journey takes longer now than it did in the days of steam trains. There are local buses, but you really need to understand the timetables as most services are not very frequent and don't run every day and don't have services after 5pm. How you are supposed to use those buses to get to or from work, I really don't know! And let's not talk about the local motorway traffic which seems to get more congested year on year.

As a city, Worcester seems to be suffering from lack of job and career prospects, especially for young people, despite being home to a large university. It's a nice enough place to live with beautiful countryside nearby, a river running through it, a sizeable Marks & Spencer in the High Street and some lovely places to eat and drink. But that's the trouble, the new job opportunities in the city are all hinged on retail and catering jobs. Gone are the days of the big employers like Kays Catalogue, Dents Gloves, Cinderella Shoes, Worcester Royal Porcelain and Metalbox. Maybe, it was like this back in the 1980s when I left school. The majority of my generation left Worcester at the earliest opportunity. A few stayed, but they could be counted on the fingers of one hand. A lot of us left for London. I certainly did and I wasn't alone.

I'd love to see an innovation space in Worcester - in the city centre - showcasing young retail and creative talent and giving them the opportunity to try out their ideas in the city and providing a business hub. I've always thought the old Corn Exchange would make a great space for that. It has been lying empty for so long with a string of failed restaurants behind it, yet it's in a central  location in an interesting and historical building. Or failing that, the Angel restaurant could be reverted back to a market hall but focused on new retailers and have a mix of small office and retail units. I'm heartened to find out that there is an organisation who have similar desires called The Kiln. I'm interested to see what they come up with and wish them every success.

I mentioned all this in passing in a conversation I had with friend and retail expert, Eva Pascoe, and she was telling me that the network effect of new technology was boosting cities and was keeping smaller towns and cities down. It's not something I'd really heard before but it made sense. This article, 'The problem with London Guilt' explains how that works in more detail and why London has become so dominant over other British cities over the years.

I'm not sure where that leaves places like Worcester but it makes for interesting reading to understand the dynamics we're living in right now and why the focus is on 'smart cities' rather than 'smart towns' or 'smart villages'.