Move over PokemonGo, You're PokemonGone with FreeBetHunt on the loose

The recent frenzy around the augmented reality PokemonGo mobile game can’t have escaped most of you. Whether it was you, your friends, your colleagues or your children who were hooked, there’s no doubt that PokemenGo had an immediate impact with some crazy scenes of mass PokemonGo players from across the globe. In case you missed the frenzy, my friend George did a little video about it to help explain the overnight sensation that was 20 years in the making.

I must admit, I did succumb, briefly, to see what all the fuss was about. It was kinda fun to play in Central London and it was kinda fun to compare which Pokemon you had with friends. But outside of that, not so much fun when you’re outside a big city due to lack of Pokestops and lack of Pokemon to actually catch that weren’t Rattatas, Spearows or Pidgeys. It also slowed down my walking when I’m actively trying to increase both my step count and the effort I put into my steps.

When PokemonGo first hit the market, you could see people playing locally where I live as it turned them into Pokemon zombies wandering aimlessly near Pokestops searching for rare virtual creatures. But that’s all but stopped now from what I can tell as the novelty has worn off. I deleted the app from my phone last week. The vibe was over.

It seems, however, that I was wrong. Brands are now getting in on the act and coming up with their own PokemonGo inspired geo-targeted treasure hunts.

The first is a game from betting company, 888Sport, imaginatively entitled 'Free Bet Hunt'. Instead of hunting Pokemon, you can hunt free bets around football stadiums. 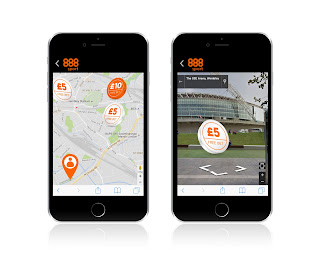 FreeBetHunt is not quite as pretty as Pikachu's virtual playground. However, that may not matter. I’m not exactly the target market for this as I neither bet nor have any interest in football despite my surname being the same as a famous footballer of the late 20th Century. So, is this a winning strategy to get football fans betting more? I don’t know. How interested are 21st Century football fans with virtual treasure hunts? I guess time will tell. I welcome your comments on that score. I do applaud 888Sport on their speed to market though and their willingness to experiment with new technologies.