The trouble with apps 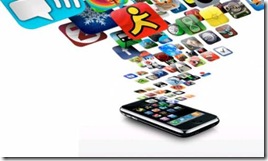 You can’t move in the mobile industry for talk of apps. An app for this, an app for that. An app for everyone that does everything. An all singing, all dancing apptastic experience.

But there’s a problem. We can’t deal with all these apps. Well, at least I can’t. I don’t know about you, but I suffer from information overload big time. I’m hungrier for new stuff than many, but once you open a floodgate on something, that information comes flooding in at a speed and volume that is just too much to handle.

And the same is happening with my phone. And not just my phone. It’s other people too. We’re suffering from App Overload. Let me explain.

Last night, I was chatting with a lovely group of business people I’d never met before at a charming networking event. And these folks didn’t work specifically in the mobile sector. Inevitably, the subject came round to our mobile phones and what apps we used. Sara described it perfectly. She said when she got her iPhone, she immediately downloaded loads of apps and then realised that she didn’t use them and didn’t even know what most of them were for. Deborah said something similar, along the lines of that apps were for boys and they liked them because they were gadgets. She only used apps that were relevant for her life.

I did the same when I got my Nexus One. I downloaded a bunch of stuff. And a lot of it is still on there but I couldn’t tell you what apps were on my phone without looking because I simply can’t remember. Using those apps never got locked into my daily patterns. The apps I actually use are Google Maps, a tube map, a few games (but I’m so bored of those now), email, and the browser. Oh, and a pdf reader for attachments. I occasionally use Foursquare but I prefer to use twitter and facebook via the browser using dabr.co.uk and Facebook's mobile site respectively. And I use pretty much the same on my Nokia N95, which is my main phone anyway. You know, because it works like a phone. I’m old skool like that.

So what conclusions do I draw from this?

1. There isn’t enough time in the world for me to search and download apps. Search on the phone is pretty awful. I don’t like to have to invest a lot of time in exploring and playing around with apps. Like most women (sweeping generalisation here, admittedly), I just don’t have the time and inclination. And I probably have more time and inclination than most people as I’m in the industry. The apps I tend to look at are ones people I know personally were involved in. But even then, I forget.

>>Learning: There’s got to be an easier way. Chomp and its ilk are not it for me. It’s too much commitment. Wish I knew what the better way was. Perhaps you do?

2. The app has to be really special and really relevant to me, my circumstances or my life at the time for me to even remember it’s on my phone and use it. There are apps on my phone that I’ve downloaded and probably never even opened.

>>Learning: If you’re going to make money with apps, you need more than a one-download wonder and you need to think about customer retention and usage.

3. There are apps I’ve downloaded that I think ‘oh, I must start using that’ whenever I see the icon. But it’s been a year and I probably haven’t used it, but I’m loathe to delete it ‘just in case’. This means my phone is full and I’m at the ‘one app in and one app out’ stage (which I should be applying to my wardrobe too, hey ho).

>>Learning: The gold rush is over. It’s now a crowded marketplace. You’re going to have to work a lot harder to get my attention and to keep it.

>>Learning: There’s a limit to how many apps you can store on a phone in the first place. You’d better earn your place on my SD card.

4. There is a finite limit to how many apps anyone can remember at any given time anyway. I’m thinking it’s probably no more than 10. But that’s a guess. Maybe someone has some research on this out there? So if you’re looking at long-term usage, rather than 30 minutes one-off play, then you have to look at your retention and re-use strategy.

>>Learning: Think about your customers and make sure what you’re doing is relevant for them. Your customers are probably not ‘just like you’ and some research and insight might come in handy.

5. And a bug bear of mine is apps that use up battery life really quickly and/or use up a ton of bandwidth and/or be memory hungry. If you’re on iPhone, I’ve heard good things about Onavo to minimise bandwidth – essential if roaming, and one of the reasons I stick to my beloved N95. It’s very hard to use up bandwidth when the browser has stripped everything but the bare essentials out. I’m going to ditch memory hunger, battery hungry, bandwidth hungry apps.

>>Learning: If you’re an app developer, then please concern yourself about minimising battery usage. And please minimise bandwidth usage. You cannot assume that the customer will have good, free wifi available to them at all times. That’s not how a mobile phone works. Using bandwidth efficiently is going to be increasingly important. We do not have unlimited bandwidth capacity. There is not a bottomless pit of bandwidth available for all.

And to conclude, the services I use most on my phone are just the ones I use most whatever device I’m on. Using the browser. I’m told I’m ahead of the curve on this one. I’m not so sure. Or maybe some people just aren’t into apps.