The NewsCorp Juggernaut adds Jamba to the fold 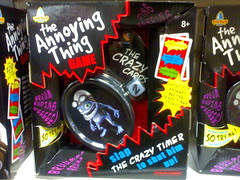 According to the Wall Street Journal (via The Guardian), NewsCorp will announce today that it has bought a 51% stake in the German ringtone firm Jamba (operating as Jamster in the UK and US). Yes, this is the company behind the Crazy Frog and who spent gazillions on advertising mobile ringtone subscription services in 2004/5. News Corp will pay $187.5m (£100m) for a 51% stake in the company. Jamba's sales rose from $40m (£21m) in 2003 to a whopping $500m (£268m) last year, but will fall back to around $300m (£161m) this year, according to the WSJ. VeriSign bought Jamba in May 2004 for $273m (£146m) in cash and stock. So it looks like Verisign has made some money on the deal and it gives them an exit strategy in the future with a potential buyer in Rupert Murdoch for the whole shebang.

NewsCorp will also merge it's current mobile division Mobizzo with Jamba and put Lucy Hood in as it's CEO. Way to go Lucy - that's a fantastic position to be in. A m-commerce proposition for myspace will be delivered by Jamba and they will also soon be launching Simpsons Mobile according to the official release on the Verisign site.

I guess this is more proof that mobile media is now being taken more seriously. Time to wake up and smell the coffee marketers. Mobile ain't goin' away anytime soon.
Posted by Technokitten at 9/12/2006 03:57:00 pm