Are you a carer, accidental or otherwise? 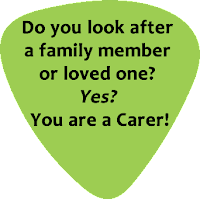 It seems like a simple question, but it often isn't a simple one to answer. To some, it will be blindingly obvious that they're a carer, but for people like me, and maybe you, it will come as a surprise that you're in this role.

I was in denial for a long time that I was Mum's carer. Mum was in denial even longer. She didn't want to lose her independence and she thought that if she accepted that I'd become her carer, or that she needed a carer, then that was her independence lost. This meant a lot to her as she felt her own mother lost her independence too young as a result of moving in with one of her daughters. I was too young at the time to have any opinion on that and don't have much memory of that time. But I do know it weighed heavily on Mum and she didn't want that for herself.

This caring thing really crept up on me and I couldn't say there was a definitive moment when I became a carer. The journey started when my father died eight years ago. It was traumatic and unexpected and not handled terribly well by the medical teams looking after my father. And my mother was in a state of shock becoming a widow at 86. She'd been wholly reliant on my father to look after the money in the household, and although Mum was no pushover, she had let him make most of their financial decisions. So this was all new territory for Mum. Plus she was grieving the man who she'd been connected to since she was 15. That's a very long time. They grew up together and had adventures together and brought up a family and travelled the world in the 70 odd years they were together. That's a big hole to have in your life.

And so it happened that I started spending more time with Mum, visiting more often and spending a bit longer with her each time I visited. And that just increased gradually over time. She wanted the company and she needed help with things as her eyesight deteriorated. And when she became ill, typically in the winter, she needed someone with her to nurse her through it, and that fell to me as I was the child who had no dependents and could, in theory, work from anywhere.

There were times when Mum and I argued about my role as a carer. In retrospect, she was concerned about me as much as she was concerned about herself. She didn't want my work to suffer but the upshot was that Mum needed me, or at least someone, with her more and more. And even though Mum had paid carers coming in, it wasn't enough. And at the same time, I was happy to take on that role and was in a position to do it.

If you find yourself in a similar position and you're spending more time with a parent and are doing more for them - shopping, cleaning, cooking, accompanying to medical appointments etc, then you are a carer. If your parent or elderly friend or relative is becoming more vulnerable due to failing eyesight, hearing, mobility or other ailment and they need more help day to day, and that is falling to you, then you are a carer. If you're doing this willingly as a friend or relative, you are still a carer. if you are doing this from a distance and spending your time up and down the motorway or railway line to provide this care, you are still a carer. You don't have to be living nearby to be a carer. Find out more about whether or not you're a carer here by taking a quick quiz.

When you become a carer, you can get support and I recommend you accept what support is available to you. You may not think you need any, but this caring lark can get very difficult at times and it's helpful to know you're not alone and that there are people who can support you. The first step is to sign up to your local carer's association. You can find out more here on the Carer's UK website.

I registered with the Worcestershire Association of Carers back in 2017. And not long after, also joined the Merton Association of Carers too. That meant I could get local support or advice whether I was in London or in Worcester with Mum. And I did take advantage of that support in many ways. Exercise classes, a day trip to Hastings, training workshops and the advice line. The advisors there can also tell you whether or not you qualify for Carer's Allowance and how to claim it and also what benefits and support the person you care for is eligible for. And they can talk you through power of attorney and other matters that will, no doubt, come up.

In lockdown, the carer's associations really came into their own by providing yoga classes and training sessions on Zoom. The yoga classes became my anchor for the week and were wonderful. What's on offer at any one time depends on what funding is available at the time so it does change.

My next recommendation is to keep a diary of symptoms. I did this in a simple A6 notebook. I looked for mobile apps but nothing really fitted the bill. Sometimes simple is good. I wished I'd started this sooner for Mum but I only started it once we were in lockdown and no longer able to have in-person visits from the cancer nurse at her recommendation. Every day, as part of our morning routine, I would take Mum's SATs - temperature with a contactless thermometer, and her oxygen levels and her pulse using an oximeter (this is the one I have). I used a no-touch thermometer (like this one) and rather than taking the temperature from her forehead, you get a more accurate reading from the inner wrist. And when getting oxygen levels and pulse, you need to keep the oximeter on for longer than you think to get an accurate reading. The numbers need to settle so give it a few minutes. And also, each hand can give a different reading so you may need to take a reading from both hands. Also, the oximeter doesn't tend to like gel nails, so if nail varnish is your thing, you may need to keep a couple of nails varnish-free!

I also took notes every day of Mum's mood and how she was feeling physically, how she was eating, if she'd needed extra oxygen or other meds, and what we'd done during the day. And if Mum felt poorly or wasn't her usual self, I'd take her SATs more frequently. This helped build up a picture of symptoms and what treatment worked or didn't work. And because it was all in a diary, on the occasion we had a call with Mum's GP or nurse, I could confidently tell them exactly what was going on and when. It also meant the medical personnel I dealt with took me more seriously as I became more intimate with Mum's illness and treatments and ultimately, I believe that led to Mum getting better care than she might have otherwise.

My final recommendation is to not try to do too much, if that's possible, and to look after yourself. I was lucky. I could give up work to focus on Mum. I know I could not have looked after Mum if I had had to work as well. It would have been too much to take on. Mum was terribly concerned that I wasn't working, but it was the right decision at the time for both of us. I have no regrets about it at all.

Caring for Mum did get harder over time. I didn't realise how tired I was until it all stopped when she died. It's taken several months for me to not feel tired all the time. The sleepless nights and busy days take their toll and they're not sustainable long term. You will need to take time out - even if it's only an hour. If carers or other support is available to you, take it. You'll probably have to fight for it. I did. The care is rationed and even if you qualify, it probably still won't be enough. Trust me on that one. I had Mum's GP onside, but even then, it wasn't easy to get the help needed so start the process sooner rather than later as it can take time. And you need to find carers to suit you and the person you're looking after. We were lucky, we already had a relationship with a local agency and a few of their carers. It made life a bit easier. But trying to get night carers sorted was a whole other ball game and extremely difficult.

There is no shame in being a carer whatsoever. It might not be what you envisioned for yourself, but that doesn't diminish the importance and responsibility of being a carer. Carers are generally underrated, overworked, underpaid and left to get on with things. Many carers are in difficulty financially and aren't getting nearly enough support financially or emotionally. It isn't an easy thing to do, but it can be the most rewarding thing you'll ever do.