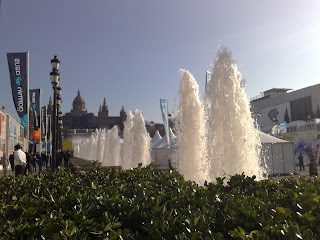 I'm getting deja vu. The big-name participants for this year's Mobile World Congress are beginning to pull out of the planned in-person event scheduled for the end of June. Just like they did last February. They were planning for 50,000 attendees and are putting in place stringent safety measures and testing to keep attendees healthy and avoid a 'super-spreader' event.
Sony, Nokia and Ericsson are the first businesses to pull out of the in-person event, but it's only a matter of time before all the big companies pull out due to 'an abundance of caution'. I know the GSMA is already working on making the show a hybrid event, and the big players will likely participate, but I have a feeling the virtual element will have to be the priority.
I just can't see a big in-person show going ahead at this point. The UK is ahead of the game with vaccinations, but even then, most of the age groups attending MWC will not have been fully vaccinated by the time of the show. And that means, with the exception of Israel, not enough potential attendees will have been vaccinated either. And even if you're vaccinated, it reduces the risk of severe disease, hospitalisation or death, but it's not a magic wand to stop it completely. Not only that, but there is growing evidence of a third wave on mainland Europe. There may be a small physical presence this year in Barcelona but it won't be the same thing at all - what with the tests and the temperature checks and the social distancing. That doesn't make for a good party. And let's face it, a lot of what makes MWC attractive is the social aspect of it.
Of course, this is a bitter blow to the show and the industry. And for me, it's yet another year when I can't hold a Swedish Beers party, or anything else in-person for that matter thereby inhibiting my earning potential significantly.
A year ago, when the first wave was building up, I don't think anyone imagined it would really go on for this long or that our lives and freedoms would be changed as much as they have. I would love to visit MWC again, but I won't be visiting at the end of July. It's just too soon. And for those thinking that life will be back to more or less normal but with masks and washing of hands come July, I am not feeling quite so confident. I think we have more rollercoaster rides ahead of us and a third wave to deal with. Buckle up. It could be a bit of a bumpy ride still.
References: https://www.cnet.com/news/mwc-will-take-place-in-person-in-barcelona-but-ericsson-sony-nokia-wont-be-there/
https://www.nzherald.co.nz/world/covid-19-coronavirus-europe-hit-by-third-wave-as-vaccine-rollout-begins/
https://www.politicshome.com/news/article/chris-whitty-patrick-vallance-third-wave-deaths-inevitable
Posted by Technokitten at 3/10/2021 06:03:00 pm