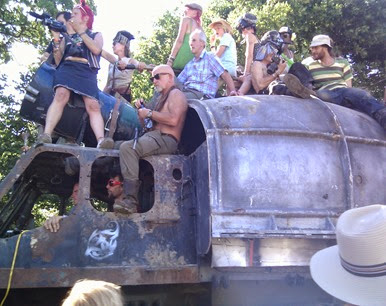 In case you hadn’t heard, it’s the annual pilgrimage to Glastonbury Festival of the Performing Arts next week. And it’ll be my 7th visit. It is the largest green field festival in the world and has over 175,000 visitors.With that many people, there’s a lot of infrastructure to put in place – sanitation, water, waste, food, parking, camping, entertainment, power, connectivity… those last two are important for the administration of the festival but also to us lowly festival-goers.

Even though one of the delights of the festival is going back to basics and, if you spend your time in the permaculture garden, the green fields, or the tipi fields, then it’s also rather lovely to spend time in nature and living ‘off-grid’. However, you still need to find your friends, find out what band is next on your ‘to see’ list, when and where your woodworking workshop is on, or when your appointment with the reiki healer is. We also use our phones for telling the time. When you don’t have a mirror, the front view camera is also useful to check you don’t have mud smeared across your face! Over the last 15 years or so, our day to day behaviour has been subtly and not so subtly changed by the mobile phone. And because of that, at the very least, we expect to be able to power up and to have connectivity. We also expect our favourite festival to supply us with an app to fulfil all our festival line-up needs.

So connectivity – it’s always been an issue at Glastonbury. So many people, in a small amount of space, all wanting to connect at the same time. It’s fair to say that coverage has been flaky over the years, SMS turn up days later, if you get a call, you can’t hear what people are saying anyway as there’s always a lot of noise, and if you get a text or email, and it’s sunny, you can’t read it anyway. Still we try. And we expect it. How else are you going to find your friends?! We are so unused to saying ‘I’ll meet you at 4.30pm by Gandhi’s Flip Flop (it’s a rather good veggie curry stall) and sticking to it. We’re reliant on SMS and other messaging services to keep our friends and colleagues updated as to where we are and how far away we are from them.

The festival has had on-going sponsorship from Orange, and now EE since the merger with T-Mobile, so for me, connectivity has never been much of an issue. And EE does have exceptionally good coverage on the site, including 4G and also, there’ll be Wi-Fi too. We allegedly had Wi-Fi last year but I never spotted it in action. I can’t say that coverage for O2 or Vodafone customers is as good.

Then there’s battery life. Oh what a joy to have the very basic phone last year with a battery that lasted for several days! At best, you’ll get a day out of your smartphone. A lot of phones these days do not have replaceable batteries so you have to either have a charged up battery pack (extra weight in your backpack – albeit small) or you have to queue for hours to sit by your phone that charges up way more slowly than it ever would at home.

This year, there’s a solution. You can buy an EE Festival Power Bar and swap it for a fully charged on on the site each time yours is drained. Well, you could… they sold out a while back. Hopefully people will be nice and share theirs around but who knows. Fortunately, I’m volunteering this year and at our camp we’ll be able to charge up our phones without queuing for hours. I’ll still be taking my extra batteries and battery pack.

And now for apps… there’s a Glastonbury app. There’s been a Glasto app for at least 7 years and it’s never been much good. It has improved somewhat, but there are still usability issues with it. I think they’re probably trying to get too much into one app. And the app is only any good if you have a higher-end smartphone with plenty memory left. It’s a chunky old file. And it’s only Android and iOS. So for BlackBerry or Windows Phone users, erm, tough.

There are a couple of new digital innovations this year. First up, the 100 page programme is now available as a free PDF download or as an interactive app for iPhone or iPad. I can’t imagine the PDF rendering particularly well on a small screen but we’ll see.

More interesting is the fact that they’re using contactless payments on site this year. This can be with a contactless card or with the Cash on Tap app. Of course, this will only work if the connectivity holds up for the terminals and you haven’t drained your battery or lost your phone in the mud on your way home from Shangri La at 4 in the morning!

Last year’s post in the same vein: 2013 is the year of Glastonbury Mobile.

Right, must dig out my wellies and give them a bit of a clean before I head off next week!