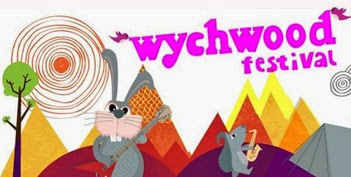 I was lucky enough to be able to attend Wychwood Festival for the third time at the weekend. It was their tenth birthday to boot. Due to commitments at #Regenttweet, I was only able to go for the last day but it was a great day and I still got to camp and do all the things I wanted to do. Plus I got up close and personal for Sunday’s headline act, The Boomtown Rats, which was one of my main reasons for going. I last saw them a very long time ago and although Johnny Fingers is now enjoying life in Tokyo, the rest of the band were definitely up to the mark and Sir Bob was on top form.

But that’s not the only reason to love Wychwood Festival. If you’ve never been to a festival or not sure about the whole camping at a festival lark, let me reassure you that Wychwood is a great place to start, especially if you have children. It truly is one of the best festivals in the UK for children as my friend Jane has written about over on her blog.

Let me give you 10 more reasons to love Wychwood Festival

1. Clean toilets. No really. They were kept really clean, fully stocked with toilet roll – even on Monday morning as we were leaving, and they had plenty of flushing toilets too if you were so inclined. Seriously the best festival toilet experience ever.

2. It’s a manageable size. You can pretty much see where everything is, you’re not far from the car park, the stages are just a few minutes from each other so there’s no tramping for an hour in mud between stages to see your favourite bands. It also means it’s a quick nip back to the tent or Happy Camper, in my case, to pick up a sweater for the evening or drop off purchases made at one of the many stalls.

3. Free lock-ups. They have these at Glastonbury Festival and I volunteered for them there one year. They’re great. You can leave whatever you like there – whether that’s money you don’t want hanging around your tent, spare phone, your bike, your rucksack – seriously, you can leave anything there. They’re open 24 hours a day so you can drop off and pick up at any time and all they ask you for is a donation to charity. £2 is probably about right. No more worrying about leaving your valuables in your tent or your car.

4. It’s the easiest camping ever. Also accessible if you’re in a wheelchair. There’s lots of space for starters so you’re not sharing tent nylon with your neighbour and you can really make it home for the weekend. Not only that, as the festival is on a racecourse, there are concrete paths everywhere so even if it has been raining, you don’t get the levels of mud that you get at other festivals. I even brought my suitcase and could roll it along the paths rather than lug my backpack out of mothballs for the night. I also spotted a fair few people in wheelchairs. As the terrain is so flat and there are lots of paths, it makes it that much easier if you’re in a wheelchair. Brilliant all round!

5. Arts and crafts – there’s stuff to do for grown ups as well as kiddiwinkles. I made myself some enamel earrings, joined a drumming workshop, and if I’d been there the whole weekend, I would also have done some yoga, ukulele playing and maybe even some wood-carving and had a massage afterwards to boot. As it was, there’s only so much you can fit into one sunny afternoon in Cheltenham.

6. Hot showers – this isn’t such a big deal for me at a festival. Why queue when you could be doing something else so a combo of a folding washing up bowl and a ton of wet wipes is how I usually manage. But it is nice to be able to have a hot shower to revive yourself. And if you pick a time that isn’t 9am in the morning, the chances are you won’t have to queue at all.

7. Excellent range of food – and it’s well priced too. Whether you want festival favourites like Pura Vida (Tex Mex), Asian, Lebanese, pizza, chips, crepes or a bacon butty, it’s all there and it’s all very well priced.

8. Beer – for those reading this who like proper beer, then you’ll be delighted with Wychwood Brewery and their Hobgoblin Beer Festival at Wychwood. They had all kinds of beer, pale ales and bitters on offer so for beer fans, it’s really rather good.

9. Superspa DJ Festival Hot Tubs – I wish I’d known in advance they would be there (I’d have brought a swimming costume) and I wish I’d had more time so I could participate. Basically, there was a big chillout tent of hot-tubs with DJs, bean bags for relaxing, a stint in the hot tub, with a drink in hand, and a hot shower afterwards. Nice one!

10. The music – There’s a really good mix of music genres and a great mix of old-timers and new-comers. Despite its relatively small size, there are several music stages, each with a full line-up across the three days. That means there’s plenty to choose from. Here’s my best shot of Bob Geldof. 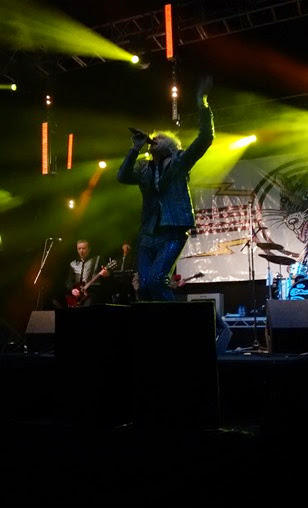 11. The comedy – when the music is finished in the Hobgoblin Bar, it reverts to a comedy venue and it’s brilliant. It’s always a blast and to be highly recommended.

12. Bonus for the mobilists amongst you. Mobile payments were spotted in the wild. I spied one of the stalls advertising that they used iZettle 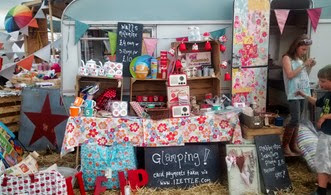 And you could also donate to the lovely people at charity Toybox via SMS text:

And what an interesting charity they are – I had no idea that not having a birth certificate could cause so many problems in countries like Brazil.

So if you fancy going to a festival next summer, then I can highly recommend Wychwood. They’ve even set up a special price for ticket sales for next year and you can pay in instalments. It’s currently £99 for an adult weekend ticket including camping and there’s a 2 for 1 offer for disabled visitors – details here. Not only that, you can spread your payments and never pay more than this year’s ticket price with the innovative Ticket for Life scheme.  Pay 25% deposit and then 9 monthly payments by direct debit. What a great idea.

So well done Wychwood. Another great festival under your belt and looking forward to 2015.

p.s. could we have some more female artists please? Thanks ever so.