Mblox has been fined for Jamba's Crazy Frog misdeeds 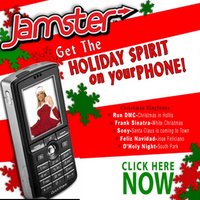 I just spotted this over at 160 Characters... It seems that ICSTIS has fined mBlox £40k as service provider to Jamba! (owned by VeriSign and includes the Jamster brand) for misleading ‘Crazy Frog’ ads and ordered it to pay refunds to all those who complained to the regulator.

It seems there were 338 complaints and a very lengthy investigation.

There is no doubt in my mind that Jamba! was indeed running misleading advertisements. They suggested that ringtones were only 30p when in fact, it was a subscription service, which, if you took full advantage of it, then each ringtone would work out at 30p each. So why has mBlox been fined and not Jamba?!

It seems to me that the rules are all a bit cock-eyed though. And the ruling has come about as an interpretation of the legalese. Yes, of course, customers should not be misled and of course they should be refunded. And of course dodgy dealings should be dealt with by fines or whatever suitable remedy.

But, logically speaking, if responsibility lies with Jamba's service providers, then this also includes the production company who made the TV, radio and print adverts. And probably should also include the TV stations and publications (including Emap's Heat magazine) who ran the Jamba! advertisements and have a duty of care, one would have thought, not to run anything misleading. So maybe they should be fined too? Although they won't be as they're not classed as 'service providers' in the latest ICSTIS guidelines.

It could also be argued that mBlox should take more care when policing its customers but how realistic is that? If you have 100s, if not 1000s of customers using your short codes, it's nigh on impossible to police every single text message, let alone try and vet all their advertising copy. That said, this was such a prolific series of advertising that someone senior at mBlox must have seen it on the telly and realised that it was their shortcode. 88888 is fairly memorable I'd say and the adverts were misleading (it doesn't take a degree in advertising psychology to work that out!).

mBlox is expected to appeal (don't blame them under the circumstances). And the only outcome of this that I can see is that aggregators will have to take out insurance against this stuff and pass on the premiums to its clients who will then want to recoup that money from its Joe Public customers.

I wonder if the ASA (Advertising Standards Authority) is going to fine Jamba! separately for running misleading advertising?

You can download the mBlox ICSTIS hearing PDF here.

Oh the irony, today, we also heard the news that the Crazy Frog is the 2nd most memorable piece of 'sonic-branding' this year, according to a new survey [via Brand Republic].