How to Take Your Company from Good to Great - thoughts on an interview with Anna Gudmundson, CEO Sensate 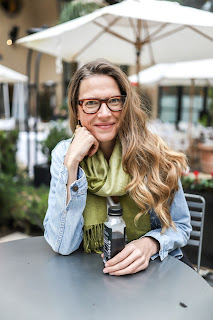 I've known Anna Gudmunson (pictured) for a long time - more than 15 years now, I think. We first met in the early days of mobile when the industry was a lot smaller than today and more close knit and we quickly became friends. We've remained friends ever since even though we no longer live in the same city, or even country! And I'm really thrilled to see what a success she's having with Sensate. [You can buy it on Amazon here]

I've met many hundreds of entrepreneurs and founders and innovators in the tech start-up scene, and although a lot of them are successful, they're not always able to articulate exactly why. I know Anna has done a lot of work on herself as well as the company and has spent considerable time reflecting on what success means personally and professionally and in this article, she shares her key insights on taking both yourself and your company from good to great. I highly recommend reading it. There's a lot to digest.

There are a few points that Anna makes in the interview that particularly resonate with me and gave me particular food for thought:

On potential burnout (very common amongst entrepreneurs) she says 'Invest in your growth, not only professional, but personal. We can have all the knowledge we need to succeed, but if we're not implementing it, there's little use. Any growth in self-awareness immediately makes you a better leader. Even if you have a university degree in some subject, how much have you invested in the subject of you - the one tool that matters in your life?' That's both profound and vulnerable at the same time. When I worked in a start-up 20 years ago, the senior team's self awareness was not as good as it could have been. Although we did the Tony Robbins thing at the time, in retrospect, that was fairly superficial. Yes, it gave us some energy to keep going under difficult times but I don't know that it helped us know ourselves or each other any better. Ah, the wisdom of hindsight! Still, the good news is that mental health is now a hot topic and more openly discussed so maybe there are new, emerging entrepreneurs who are doing the work on themselves as well as doing the work on their start-up. We live in hope!
Anna reminds us that being a start-up founder is a performance sport and you need to treat it as such. As an aside, that also means it's not for everyone and it also means you will need help - you can't do it all yourself. I would argue that it's a team performance sport as well as an individual sport. That means looking after yourself, keeping your mind and body in good condition. It's about persevering too.

Anna quotes Heraclitus who said in 500BC 'the only constant is change'. I think that's truer than ever with external events beyond our control affecting our day to day lives. Whether that's the war in Ukraine, Brexit affecting trade, energy prices skyrocketing or living through a pandemic. As a business leader, you need the flexibility to deal with that.

Anna also shares her insight about mental toughness - she says 'the most underestimated aspect [of running a business]: the mental strength needed in facing challenges. All responsibility lands on you; there's nowhere else to go.' I know Anna has been through some seriously tough times and she shares one story in the article about the challenge of selling a company under very difficult circumstances. This stuff is hard. There's a lot at stake and no-one wants to fail at something like this.

So if you're a start-up founder, or thinking about being one or working for one, then do give Anna's interview a read. I highly recommend it.

And for a bonus, why not watch Steven McRae, Principal Ballet Dancer's video about using Sensate and remember to love your Vagus nerve!.