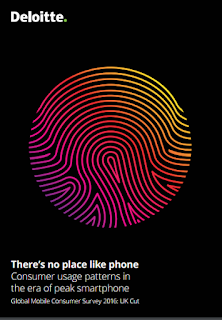 And it's a treasure trove of the latest consumer trends when it comes to mobile usage in the UK. Well worth a look if you're interested in the British consumer at all.

From the executive summary (emphasis my own and some minor edits):

"This year’s report marks the end of the smartphone growth era, and the start of its consolidation. A mere nine years after the launch of the first full touchscreen smartphone, adoption is nearing a plateau, at 81 per cent of UK adults, and 91 per cent of 18–44 year olds.

The smartphone user base is approaching an unprecedented peak. No other personal device has had the same commercial and societal impact as the smartphone, and no other current device seems likely to. While the base may plateau, relentless innovation continues at device and network levels. Devices are likely to incorporate more functionality and get even faster. Biometric sensors, particularly fingerprint readers, are likely to see widespread adoption.

Over a quarter of smartphones now have a fingerprint reader, of which three quarters are in use. The majority of phones are now connected to 4G, and cellular networks are getting ever faster, with headline speeds now at over 300 Mbit/s.1 As speeds rise, ever more latent, high bandwidth applications become viable. It is now as easy to read the news on a phone as it is to live stream a breaking news event from a smartphone.

Businesses and consumers are still determining how best to use these devices. For the former, a common dilemma is over whether to use apps or websites. The typical UK user downloads 20 or fewer apps.

Our research suggests that apps are not the right approach for every business.

Consumers, who collectively look at their smartphones 0.4 trillion times per year, still need to identify how to use their devices in a balanced way, at a level that suits them, their other halves and colleagues. It is the sleek digital Swiss army knife that can be used at every stage of the day. How people will use their devices to communicate will be driven by consumers.

The traditional voice call has become steadily less popular over the last four years, and usage of email, social networks and instant messaging has risen in tandem."