I’ve just spotted these slippers. They’re fantastic. What a simple idea, very well executed. They also appeal to me as they’re made from felt which I enjoy making too and I know how lovely and comfortable they will be. 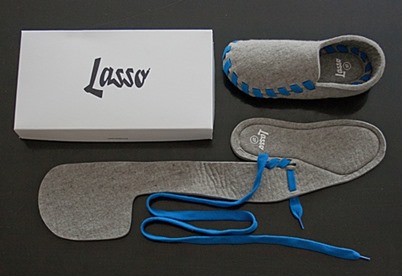 Interesting to see that this year, their Kickstarter campaign was a huge success raising more than 3 times the amount of money they were looking for. So why was it their Indiegogo campaign from last year was a bit of a disaster? Is it a timing issue? Not offering a wide-enough range of sizes initially? Or maybe Indiegogo just isn’t as good? Or maybe they had better visuals and copy the second time around? Or maybe someone just picked up on the Kickstarter campaign and that was the catalyst for success?

Email ThisBlogThis!Share to TwitterShare to FacebookShare to Pinterest
Labels: miscellaneous