It’s Monday, there must be some (mobile) stuff going on

It’s Monday night and normally at this time, I would be concluding our Mobile Monday session in anticipation of chat and mingling at the bar afterwards. However, due to an inordinate amount of snow (there’s over a foot of it in my garden in South West London) and a distinct lack of public transport available, we’ve had to postpone tonight’s event until next week. So rather than deprive you of your mobile fix entirely, I thought I’d share a few things I’ve been reading about mobile-wise of late.

Long form video content appeals which surprises those who are still fixated on the ‘snacking’ element of mobile entertainment. Of course there is still a case for ‘snacking’ on mobile, but much mobile internet usage, especially since the advent of the iphone, is actually at home and complementing other media usage. There’s more discussion about there being more than one mobile context here.

If mobile entertainment, video or otherwise, is your bag, then you could do worse than head to London to see Ralph Simon in action at E.Factor’s event on 23rd February. It’s free for members to attend and £28 for non-members.

Tonight, we *had* planned to talk about the role of widgets in the future of the mobile web. Instead, you’ll have to make do with Vodafone Betavine’s widget competition. Betavine, a Vodafone Group R&D lab, is offering mobile developers a chance to win £20,000 in a new mobile widget competition. The competition opens today and runs until 30th April. The rules are very simple and seems like a great opportunity to me.

Opera claims that 9 out of 10 mobile internet users are male. I think this research is somewhat skewed. Research I’ve been looking at shows that smartphone usage, including the iphone, is heavily male skewed which probably explains the figures that Opera is reporting. Overall, however, the mobile internet is older and more female than you might expect. At least that’s what the nice people at m:metrics shared with me recently.

And last but not least… 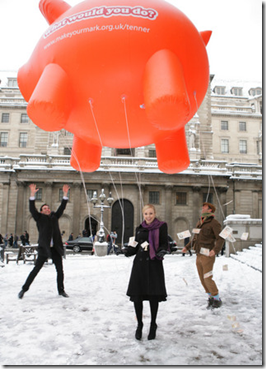 Despite the snow, my friend, Oli Barrett, made a valiant effort at the crack of dawn to launch his Make Your Mark With a Tenner competition. Possibly not the best day of the year to choose to launch your new campaign, but nevertheless, it’s got picked up on by The Telegraph. It’s a really simple premise, 25,000 kids will get given a tenner and a month to go and make money with it. Oli explains it all here.