I spent the first 10 years of my working life in fashion retail on the shop floor, managing various fashion outlets in the Midlands and London’s West End. That was back in the day when the ordinary customer used a landline, didn’t have a computer at home, watched a TV programme at the same time as everyone else, got your films at the local video shop and we carried copies of the A to Z London in our handbags or pockets to work out our way around London. It’s not actually that long ago.

At the time, we couldn’t have imagined how the retail landscape would change. I remember when I was part of the launch team at Episode’s flagship store in Knightsbridge, our tills were actually laptops with printers built in and these were hidden neatly by custom made cash desks. We just kept the cash in a drawer with a lock. Those laptops were the height of modernity in the fashion retail sector. I’d never seen anything like it at the time (we’re talking 1993/4). I’d been used to the tills that you still see in the likes of House of Fraser. I’d never seen a laptop so small or one with a built-in printer in my life! It was kind of a big deal for us. I was used to filling in forms in triplicate to keep tabs on sales, targets and stock. 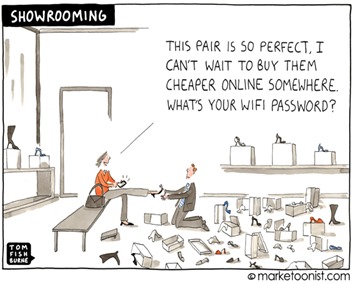 But times, they have changed. Albeit the retail future is very unevenly distributed. This cartoon from marketoonist sums up the current retail landscape as many of us can relate to.

Except, most customers aren’t always online or obsessing about their phones. At least, not yet. And therein lies a big challenge. How does a retailer cater for the customers who operate in the old way – i.e. don’t tend to shop online, have a basic distrust of the likes of eBay and haven’t yet tried Amazon – and cater for customers, like me, who operate in the new way – checking prices, avidly ebaying, have been using Amazon for years and for whom shopping online is completely normal?

And not only that, but there are differences geographically. Go to Worcester, Winchester, Warwick or Wigan, and you won’t find people glued to their phones in the same way they seem to be in London. This might be down to lack of connectivity (mobile signal in Worcester, even in the city centre, is woeful) so they don’t even bother exploring the world of the web when out and about and don’t miss it. Or it might be that they just don’t see a need to constantly check Facebook and twitter to see what their friends are doing as they’ll be seeing them later, or the chances are, they’ll bump into them on the way home.

Nevertheless, retailers do have to face this challenge – independent stores and big chains alike. The future may not be here in Worcester, but retailers are feeling the pain and we’re struggling to keep our High Streets alive with more and more shops closing. I noticed another shop boarded up in my local neighbourhood this week. They say we’re a nation of shopkeepers. Can we hack it as shopkeepers in this digital age?

Discussion about mobile data usage based on location, type of job etc.. Highlights a potential digital divide and lots of differing opinions and anecdotes about usage and connectivity.

P.S. There’s a mobile retail summit on in London on Wednesday 24 April. Get 50% off by using code MRS50. I’ll be there discussing this and other issues.